Functions of Pancreas in Digestive System 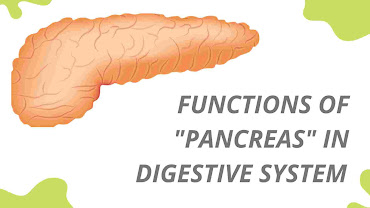 An important organ is found in our digestive system, which we call the pancreas. The pancreas plays a very important role in the digestion of our food.

Do you want to know what the functions of the pancreas are in our digestive system?

You have come to the right place. By the end of this post, you will know this very well.

Talking about the pancreas, it is present on the left side of the abdomen, behind the stomach.

It is pinkish-orange in colour. It is about 15 cm long and elongated in structure. It weighs around 120 to 145g.

So here we see an overview of the pancreas.

Earlier, we discussed an article titled “The Functions of the Liver in the Human Body.” You can also read that article for more clarity.

Now let us know the functions of the pancreas in the digestive system.“

Function of Pancreas in Digestive System (In Detail)

There are many types of cells in our pancreas. These cells make different types of enzymes and hormones. Every hormone and enzyme serves a specific purpose.

The pancreas is a gland that is both endocrine and exocrine. The pancreas performs both types of functions. Let’s know in detail.

The pancreas has a duct that is directly connected to the small intestine. If we see the inside view of the pancreas, a leaf like structure is found around this duct inside the pancreas, which is called acinar cells.

These acianar sales have a very important role. When food passes from our stomach to the small intestine. At the same time our stomach produces a hormone called gastrin which stimulates the acinar cells. 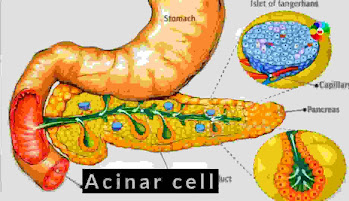 There are other types of cells on the wall of the pancreas’ duct which are called centroacinar cells.

These cells release bicarbonate. This bicarbonate is alkaline in nature and works to neutralise the acidic food that comes from the stomach.

In the small intestine, pancreatic juice combines with food to break down carbohydrates, protein, and lipids, making them easier for the body to absorb.

The pancreas sends these enzymes through the duct. For this reason, the pancreas is called an exocrine gland.

Islets of Langerhans are another type of cell found around acinar cells.
These are of three types: alpha cell, beta cell, and delta cell.

Alpha cells produce the glucagon hormone. It converts stored glycogen (which is a stored form of glucose) in our body into glucose when needed and mixes it into the bloodstream.

Beta cells produce insulin hormone. This hormone regulates the amount of glucose in the blood flowing through the bloodstream.

When the amount of glucose in the body is high, glucose is stored in the muscles in the form of glycogen. And whenever our body needs it, the glucagon hormone converts it back into glucose and provides energy.

The pancreas sends these hormones (glucagon and insulin) directly into the blood. Hence the pancreas is called an endocrine gland.

So in this article, you must have come to know very well what the functions of the pancreas are in the digestive system.

I hope you liked this information. Read similar articles related to the human body on our blog.

Don’t forget to tell us your opinion in the comments.
Thanks for reading!