10 Functions of Liver in Human Body 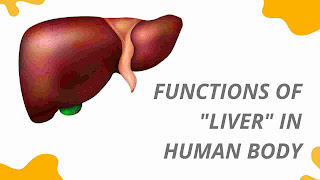 Liver is one of the crucial organs of our body.
Do you want to know 10 Functions of the liver in the human body?
You are in one of the best articles to be found in the internet.
By the end of this article you will get to know about the functions of liver very well.
Liver is found only in those organisms which have backbone.
The liver is the largest gland in our body, which is located on the right side just below the diaphragm.

The liver is dark brown and weighs about 1.5 kg. Its width is about 15 cm and it is divided into two lobes which are known as right lobe and left lobe.

Earlier, we discussed an article titled “The Functions of the pancreas in the digestive system.” You can read that article for more information.

10 Functions of Liver in Human Body (In Detail):

The most important function of the liver is the production of bile juice.

Bile juice is produced in the liver and stored in the gall bladder (the gallbladder is a pear-shaped organ found just below the right lobe of the liver).

Bile juice helps in breaking down fat from food into fatty acids in our intestine. This helps fat-soluble vitamins and nutrients be more easily absorbed into the bloodstream.

This fibrinogen protein helps to form a blood clot during a cut in the body. Therefore, indirectly, the liver also saves the blood coming out of the body during the cut.

The liver also produces a protein called heparin.
Heparin is produced inside the liver, which prevents blood from clotting inside the body.

(4)-Regulates the amount of glucose in the blood:

Under carbohydrate metabolism, the liver converts the glucose part of the blood into glycogen and stores it in its hepatic cells. The liver breaks down the accumulated glycogen into glucose when the body needes glucose.
And then this glucose dissolves in the blood and fulfils the needs of the body.

Scroll down to read more functions of the liver in the human body.

An Intresting fact about the liver: the human liver does not die until 75% of its cells are damaged. The liver repairs itself on its own.

(5)-Stores some amounts of vitamins, iron, and copper:

Vitamins and minerals obtained from food are used by the body. But the extra unused amount  remains in the body itself.

The liver stores the remaining amounts of vitamins A, B12, D, iron, and copper. The liver adds these stored vitamins and minerals back to the body when  needed.

(6)-Convert carbohydrates into fat when needed.

When the body lacks fat, the liver converts some amount of carbohydrates into fat to meet the body’s needs.

The liver forms R.B.C. in the embryo of mammals during the development of the body.

The deceased R.B.C. is decomposed by the liver into bile pigment and leaves the body. That is why bile juice is called “the graveyard of R.B.C.”

(9)-Performs detoxification in our body:

Our liver naturally detoxifies our body. The liver does detoxification in our body. It cleans the waste and toxins from the body and helps in keeping the body healthy.

The liver produces antibodies. These antibodies fight bacteria and viruses (antigens) that enter the body through food.
Therefore, these antibodies protect our body from diseases caused by antigens.

So we hope that by now you must have understood well the functions of the liver in the human body.
On this website, you can learn more about different body organs and get important information.
Do share this article with your friends. Don’t forget to comment.
Thanks for reading!
Read more articles